‘Strangers in Mohua’ 2o10, an article for Maritime History # 9

On p.30 I wrote the following:

Tasman had no idea of the population of Mohua, but we can make an educated guess. Probably it never exceeded a few hundred, since there were no [very] extensive cultivations here and the local people must have relied heavily on kai moana (sea-food). Yet the Dutch saw 22 waka [‘by the land’], and were pursued by 11, ‘swarming with people’. [Mack (ATL 2005) has since written that Witsen’s Noord en Oost Tartary, drawing on information in a lost diary of Visscher’s “says that there were 30 people in each vessel.”]   To man 22 waka, some 200 warriors must have been present, [at least] more than the local people could be expected to find at short notice. Which raises the possibility that the Dutch were attacked by a Taua (war party) from another area. Could the smoke the Dutchmen saw as they sailed around Farewell Spit have been the work of raiders on shore? The Maori were a war-like people, and summer was the favoured season.

Possibly the brief struggle off Wainui Bay was the most effective engagement ever fought against a colonial power. Despite the warnings in their instructions the Dutch seem to have been surprised and outmaneuvered. So discouraging were their reports of the incident that for 127 years no other Europeans paid a visit. Whether the successful warriors were Ngati Tumatakokiri, or warriors from another region, their brief triumph in 1642 served a useful purpose for Maori as a whole. If they [were] to be colonised by Europeans, then from their point of view, the later the better.

Later, in 2010, at the request of Ab Hoving, co-author of The Ships of Abel Tasman, I wrote the shorter article of the same name linked to above, for a Dutch publication available in English which Ab co-edited. In this I wrote:

Most commentators have assumed the Maori who drove off the Dutch were Ngati Tumatakokiri, then the inhabitants of Mohua. There is another possibility: they could have been a Maori expedition from another place. Perhaps they beached their waka on the beaches east of Mohua before or after crossing what is now Cook Strait. Maori used greenstone, a variety of jade, for tools and ornaments. The only source was on the south island’s west coast. The double-hulled waka Tasman saw were not mere fishing craft. A waka hunua held more men and could sail better than a waka with a single hull. If each such waka hunua held between ten and twenty men, and there were twenty-two or more
of them, it seems unlikely they all came from Mohua, whose population at the time was small. Who were the Maori warriors that Tasman met? Were they from Mohua or somewhere else, perhaps a warparty? What happened to the sailor that they stole, and
was he really dead? We cannot ever know these things for sure as the accounts we have are incomplete and sometimes contradictory. But the events in Murderers Bay did have important consequence: so off-putting were Dutch accounts of these New Zealanders that for 127 years no further Europeans saw fit to visit them.

Since then I presented my two more or less novel ideas at the Tasman 370 Seminar: first that Maori who attacked the Dutch in Golden Bay in 1642 might have been visitors, not necessarily Ngati Tumatakokiri and second that neither the Dutch officers in the rather distant ships nor the survivors of the attack on Zeehaen’s ‘praeutien’ could have determined if the captured man was actually dead, rather than stunned or simply terrified. I argue that Maori (who weren’t necessarily just looking for a good meal, as historians Like James Belich have suggested) would have preferred a living captive to a dead one, and very possibly did have a choice. Dead men tell no tales and are therefore a lot less useful.   So if he wasn’t dead, he could have lived an interesting life.

The Tasman story is in many ways a ‘post colonial’ text: not only do the ‘stone age’ locals easily see off their uninvited high-tech European visitors – they also possibly acquire New Zealand’s first ‘Pakeha Maori’ who might or might not have gone on to marry into his new community. Genetics could perhaps prove this one day in the affirmative, but I don’t think the ‘living captive’ theory can be disproved, on available evidence. Whether dead or alive, the Maori ‘captive’ (significantly omitted from many 19th and even 20th century re-tellings) gives agency to Maori, not to Europeans.  A Dutchman evidently ‘went ashore’ alright, but he did not have agency because he was a helpless victim of non-Europeans who did. Is this the kind of story we are used to hearing about indigenous peoples’ first encounters with Europeans? I am reminded of these thoroughly colonial lines:

For in the bay, where nothing was before,
Moved on the sea, by magic, huge canoes
With bellying cloths on poles, and not one oar,
And fluttering coloured signs and clambering crews.

And he, in fear, this naked man alone,
His fallen hands forgetting all their shells,
His lips gone pale, knelt low behind a stone,
And stared, and saw, and did not understand,
Columbus’s doom-burdened caravels
Slant to the shore, and all their seaman land.

The Tasman story isn’t easy to make out through such a lens, though some have tried, and on consideration this is really worthy of a dedicated post.

During and after the 370 Seminar in 2012 I also learned that Zeehaen’s praeutien was, in all probability, an Indonesian tingang; neither a ‘cock boat’ as Heeres and Sharp translated ‘praeutien’ nor a ‘shallop’, Hoving’s English term for a ‘chaloupe’, although it may have been the Heemskerck’s shallop that eventually recovered it.

I would value any further discussion on any of these points.

The waka shown below, and six others, appear as illustrations in ‘Strangers in Mohua’ 2o10, an article for Maritime History # 9

I am still working on a reconstruction of the tingang/praeutien 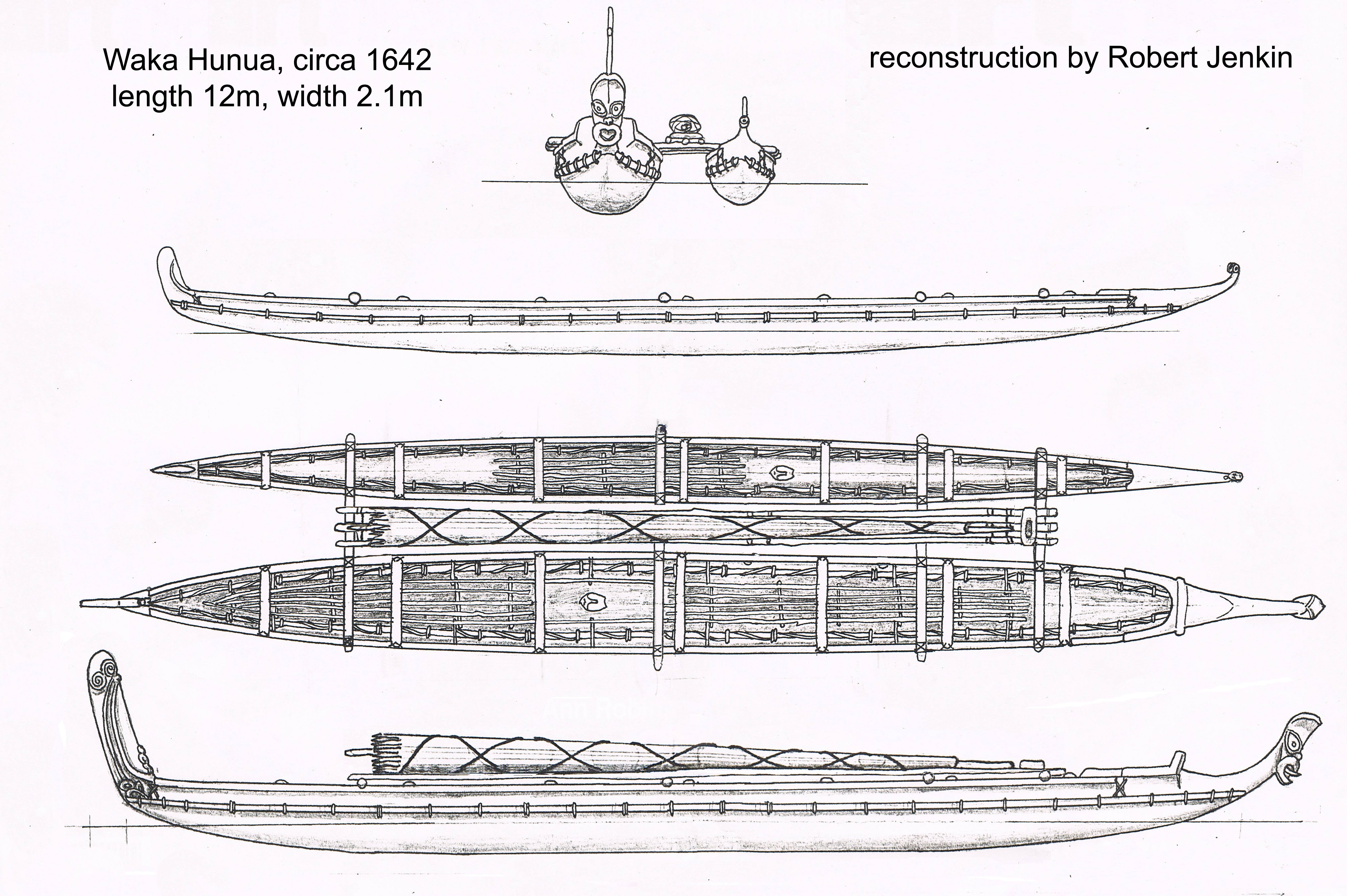