In The Voyages of Abel Janszoon Tasman, 1968, Andrew Sharp did not attempted to exactly locate Tasman’s 1642 anchorage between Dec 21st and 26th. Instead he cautiously observed: “It is difficult to relate the positions in the drawing … and the chart … to each other or to the precise topography of the area, or to identify the rocks behind which they anchored with Stephens Island NNW. The anchorage cannot be pinpointed, but was somewhere east of D’Urville Island. 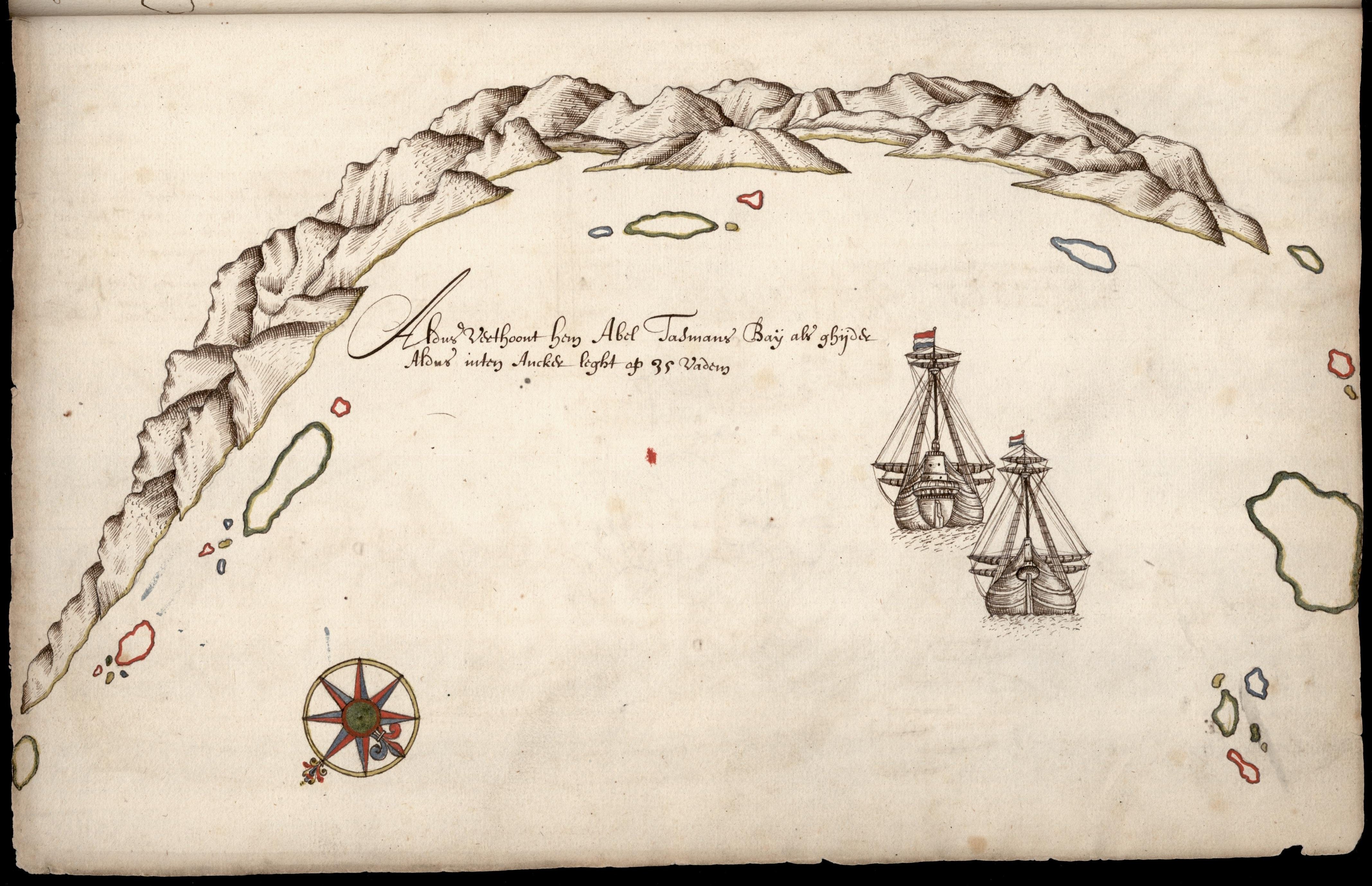 It is indeed hard to to relate the positions in the drawing (above)and the chart (below) to each other or to the precise topography of the area, because the chart seems to place the D’Urville anchorage about half a degree south of the Golden Bay anchorage, a distance of some 50km. 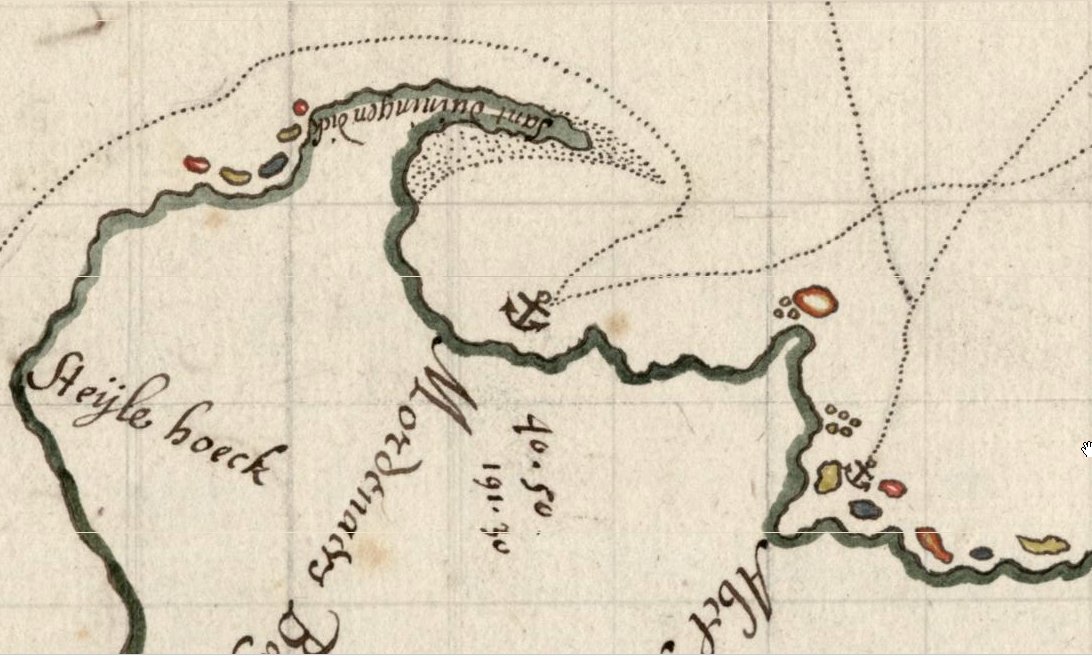 Since Sharp published in 1968 more has been learned. In 1991 Grahame Anderson published an article: ‘Tasman revalued, a note on Gilsemans’ drawings’. Anderson was more confident than Sharp, and having visited the area in 1985 on an 11 metre yacht he wrote “Within a few minutes of arriving at what we thought might be the right place, using Tasman’s bearings to Stephens island and his depth at the anchorage as primary guidelines, we found to our surprise and delight that we had pin-pointed their position to within 50 metre. Gilsemans’ drawing was a precise cartographic document, with every island, headland and hilltop in exactly the right place, and its curved coastline encompassed the whole of the top of the Marlborough Sounds from Cape Jackson in the east to Cape Stephens in the west. 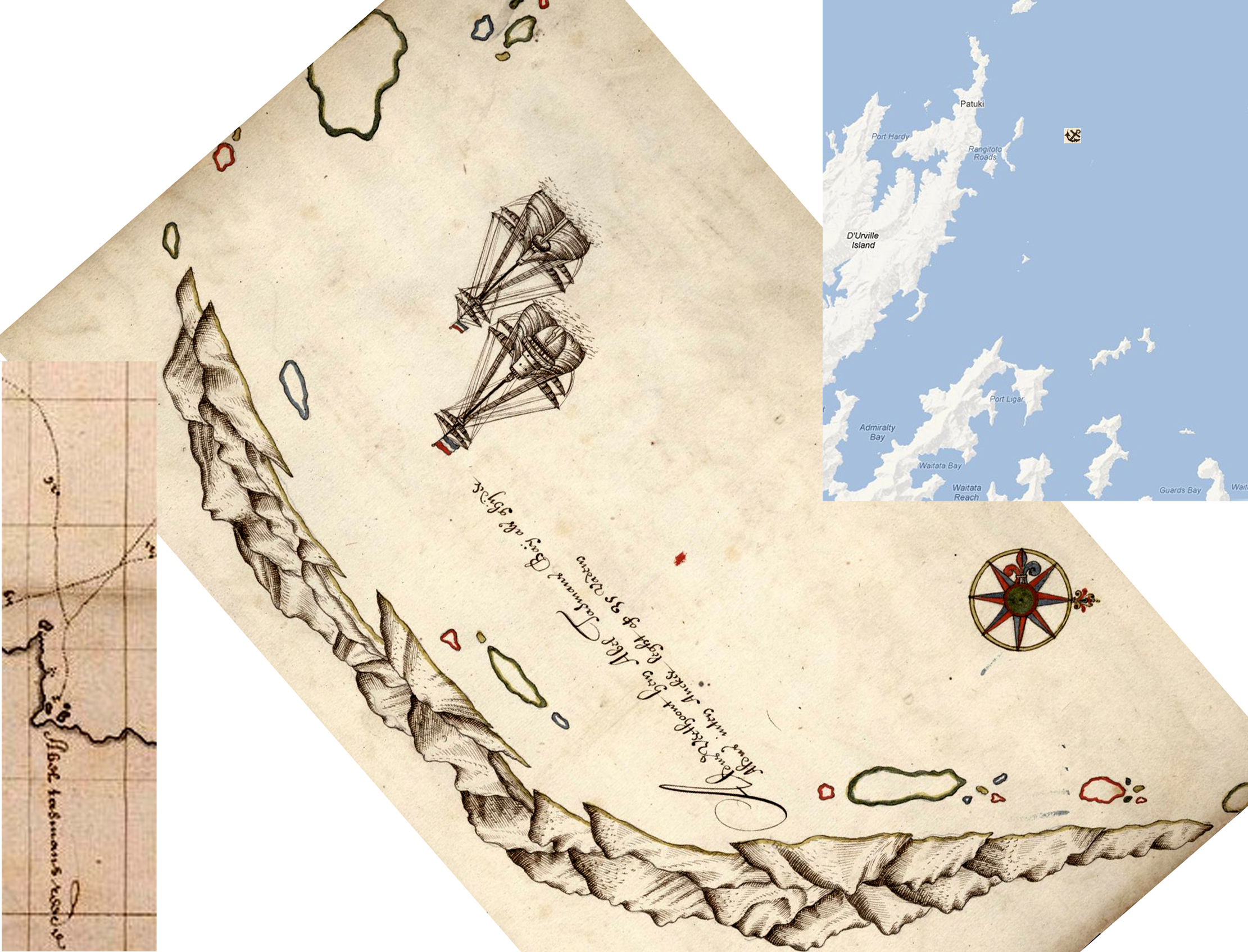 To understand the drawing in the way Anderson does its helpful to align it with a  map. 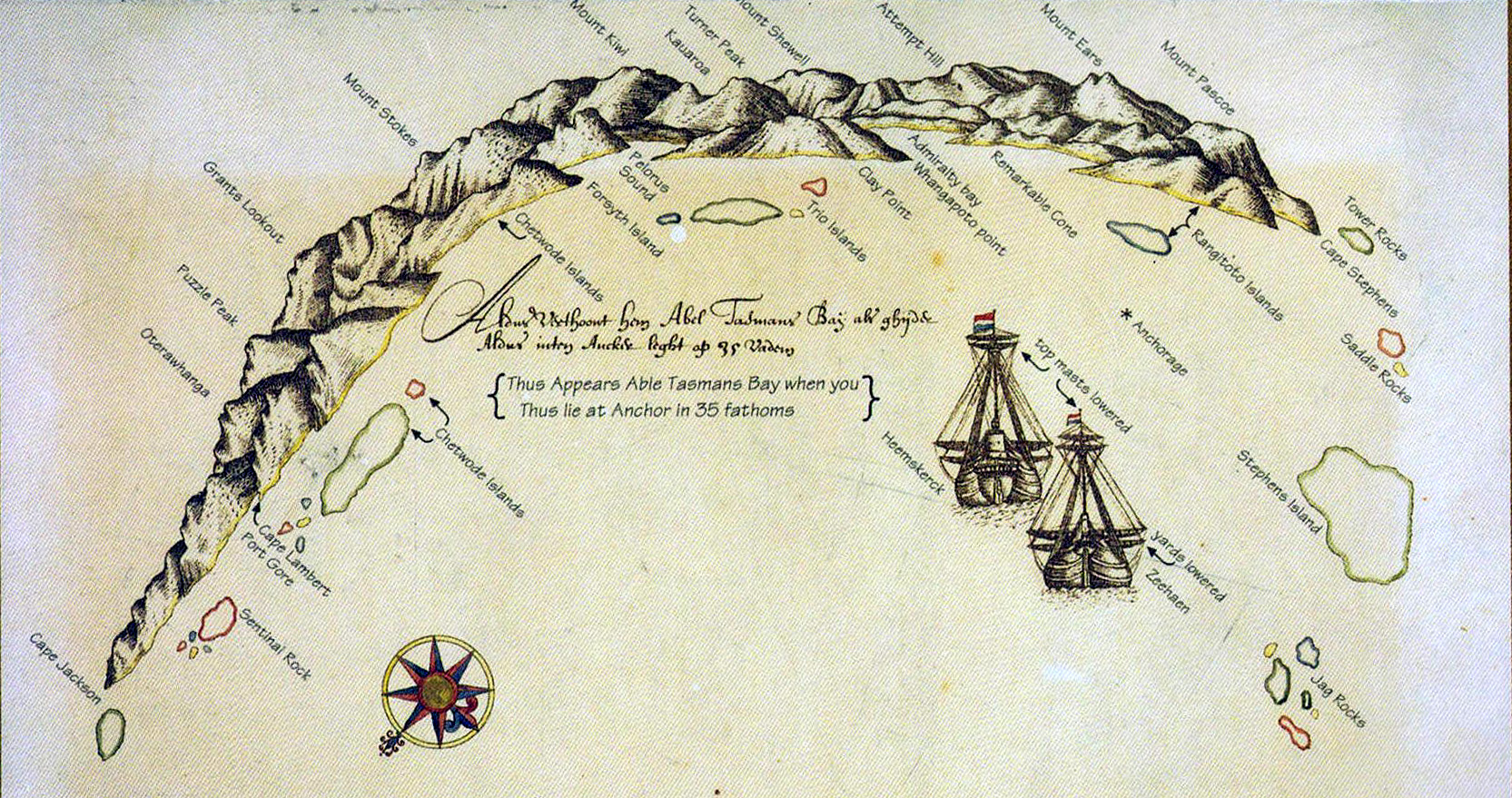 It’s also helpful to reject Sharp’s translators phrase “let our anchor fall there behind some rocks” in favour of Heeres’ translation: “then dropped our anchor behind a number of cliffs in 33 fathom, sandy ground mixed with shells. There are many islands and cliffs all round here.”

Now, having photographed the area myself from a point just a little closer than Anderson’s to the shelter of Rangitoto Islands numerous cliffs, I can confirm that his location, or one close to it, makes the best sense of all the different strands of evidence:

While cloud concealed many of the higher features Anderson identifies, I have found Google Earth 3d a helpful tool, as it allows the user to zoom in on every feature Anderson identifies, viewing them all from different altitudes as necessary and so ensuring the  topography is accurately understood.

The Google Earth derived image above is taken from the anchorage location as established by Anderson (2001, p.98), whereas the photo panorama above it is from a rather more sheltered position somewhat closer to the cliffs of Rangitoto Islands. The panorama below is from a position even further out than Grahame’s, but all three are on a line between Mount Pascoe and Jag Rocks. Both photo panoramas are taken with a depth of around 50 metres, which I regard as more compatible with the 1.7 metre fathom Hoving states was used by Dutch in 1642.