CLICK HERE for the latest Abel Tasman Miscellany–mainly about plans for  First Encounter 375. You can receive the “miscellany” newsletters automatically; email your details to tasman1642.nz@gmail.com

Yes, the 375th anniversary of the dramatic “first encounter” between tangata whenua (Maori, who first settled New Zealand) and another people takes place on 18 December.

In collaboration with Manawhenua ki Mohua, artist Robin Slow has created a striking logo with deep significance (explained below). 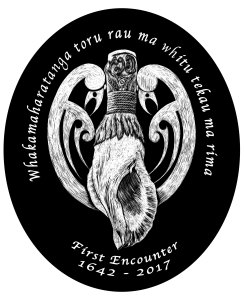 Tasman’s time in New Zealand waters, which also included the first Christmas (sheltering behind Rangitoto/d’Urville Island) was from 13 December 1642, when land was first sighted, to 6 January 1643 when the voyagers named Three Kings Islands as they left to sail north towards Tonga and Fiji. 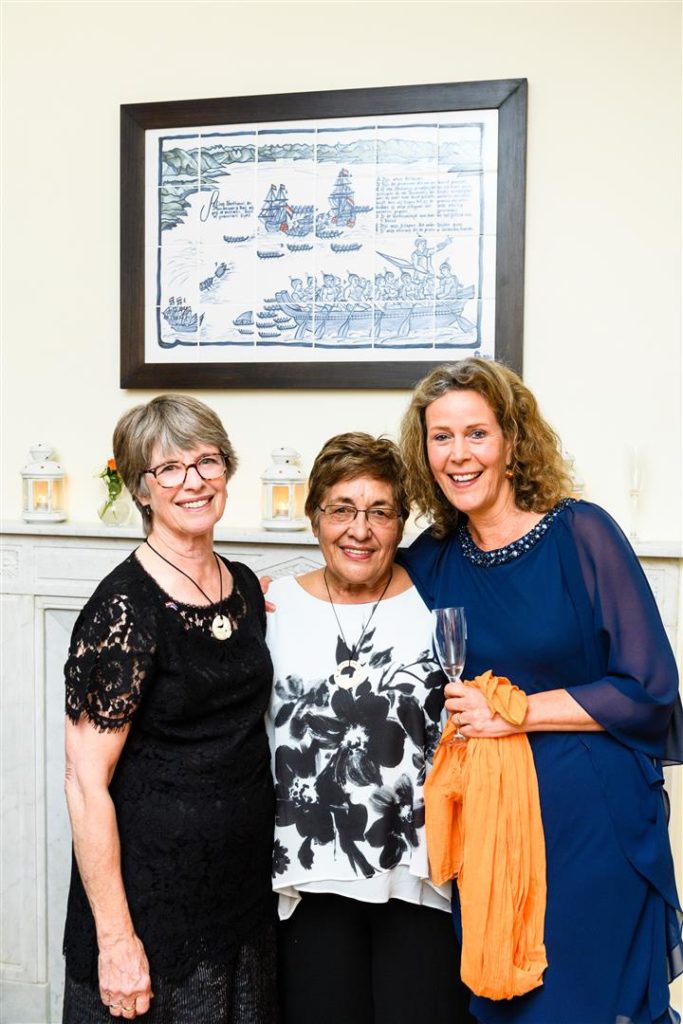 Ambassador and Mrs Zaagman will be in Golden Bay/Mohua for this year’s main commemoration which will run from 16 to 19 December 2017.  Details to follow:  please email  tasman1642.nz@gmail.com to receive information as plans evolve.

Robert Jenkin (on the right) with two crew and the cardboard scale model “Praeutien” (small boat) referred to in Tasman’s account of the events of 18/19 December 1642.  “Praeutien” was first across the line and also won the senior best technical design award in the 2016 Cardboard Boat Race held annually at Tata Beach, in Golden Bay/Mohua.

“Praeutien” is an extra string to Robert’s Tasman “bow” — his diorama and interactive are part of the rich displays at Golden Bay Museum, along with his book Strangers in Mohua. The boat race win (on 29 January) feels highly appropriate in this 375th year of remembering that “first encounter” and the meeting of two worlds. 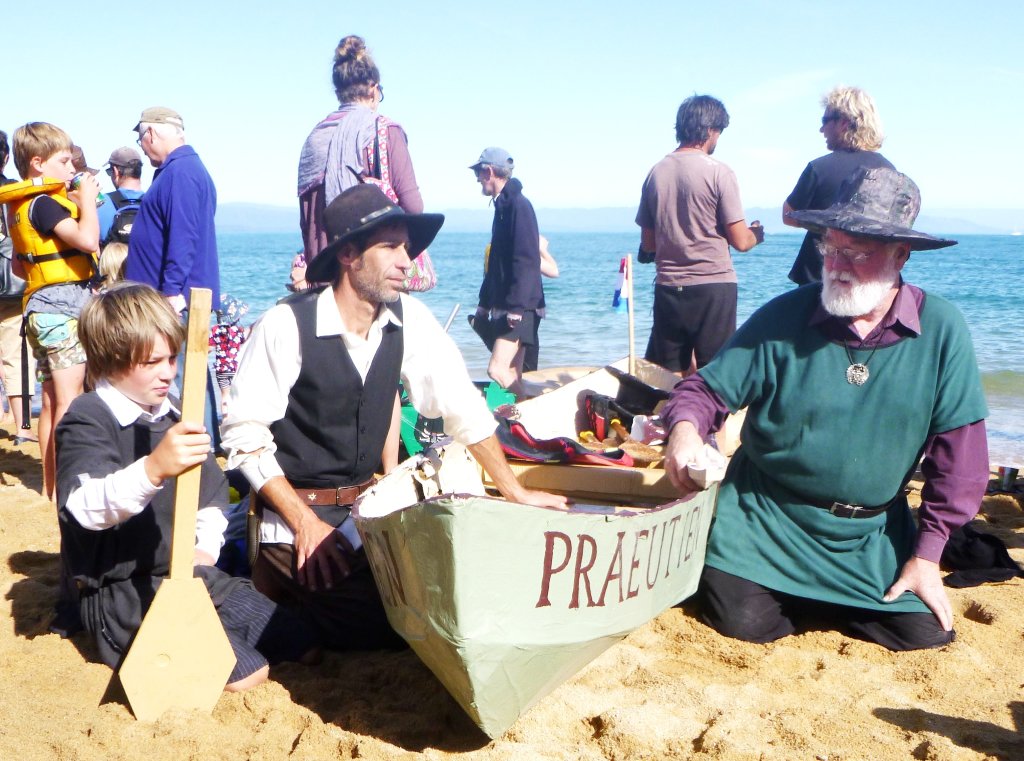 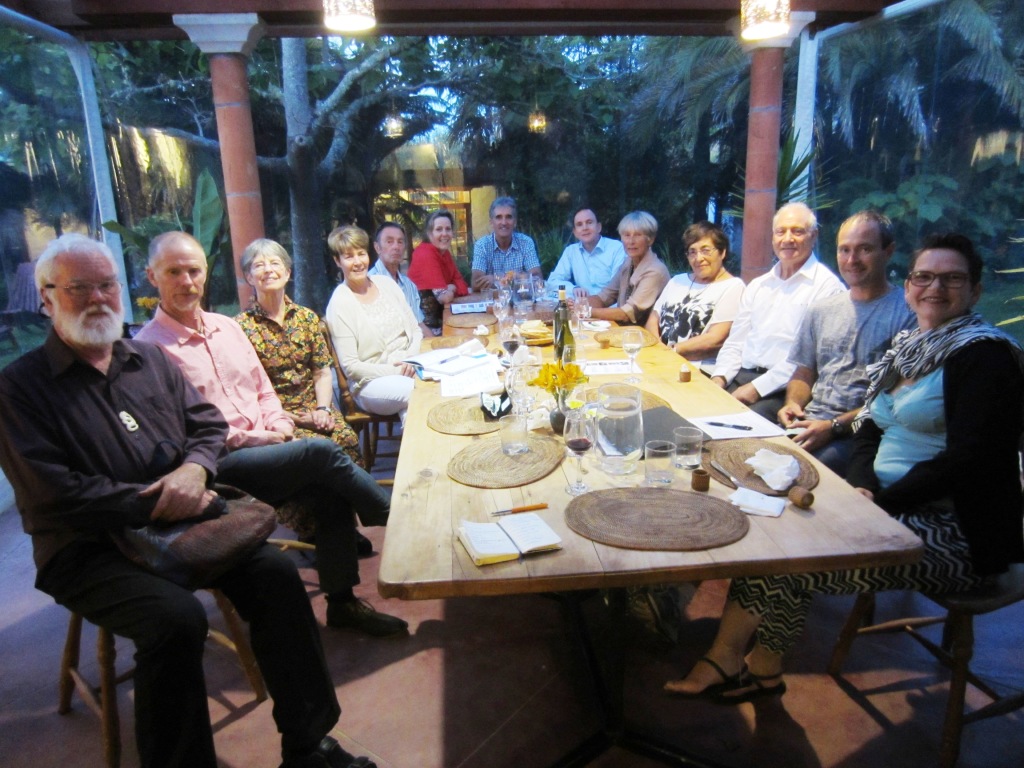 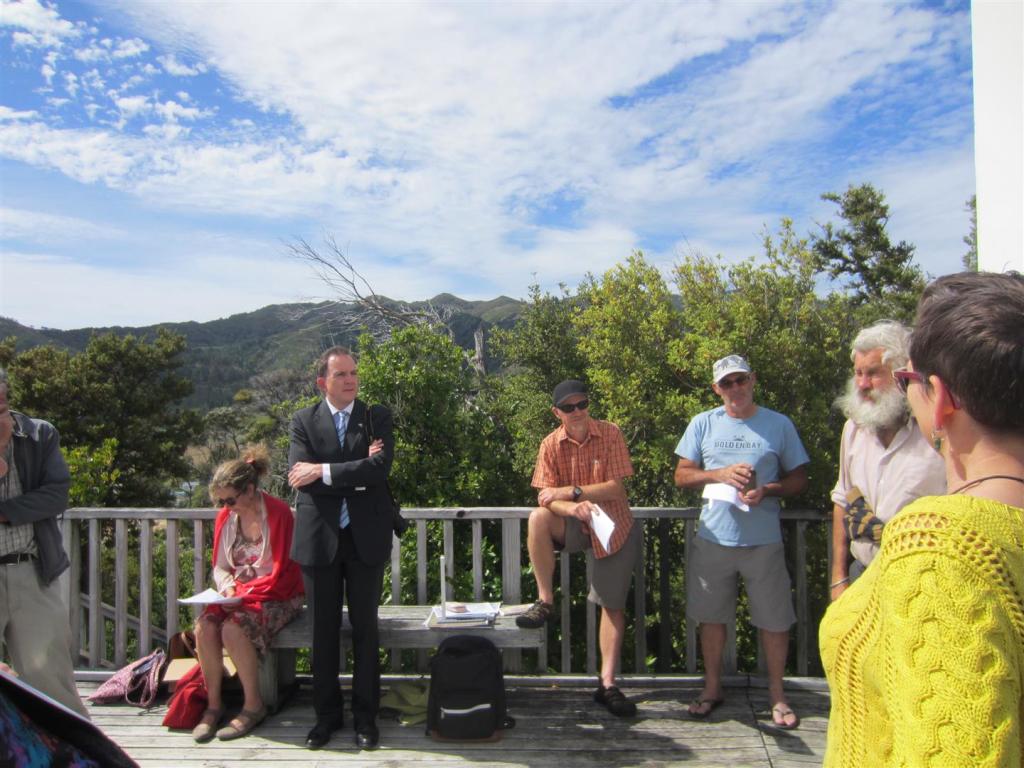 onument, Sunday 18 December (374th anniversary): Richard Struthers (DOC) spoke about plans to significantly upgrade the site and monument, while Researcher Dave Horry talked about the actual events and location of the anchorage. Ambassador Zaagman made a strong personal commitment to being in Golden Bay/Mohua on the anniversary in years to come–but especially for the 375th anniversary in 2017. 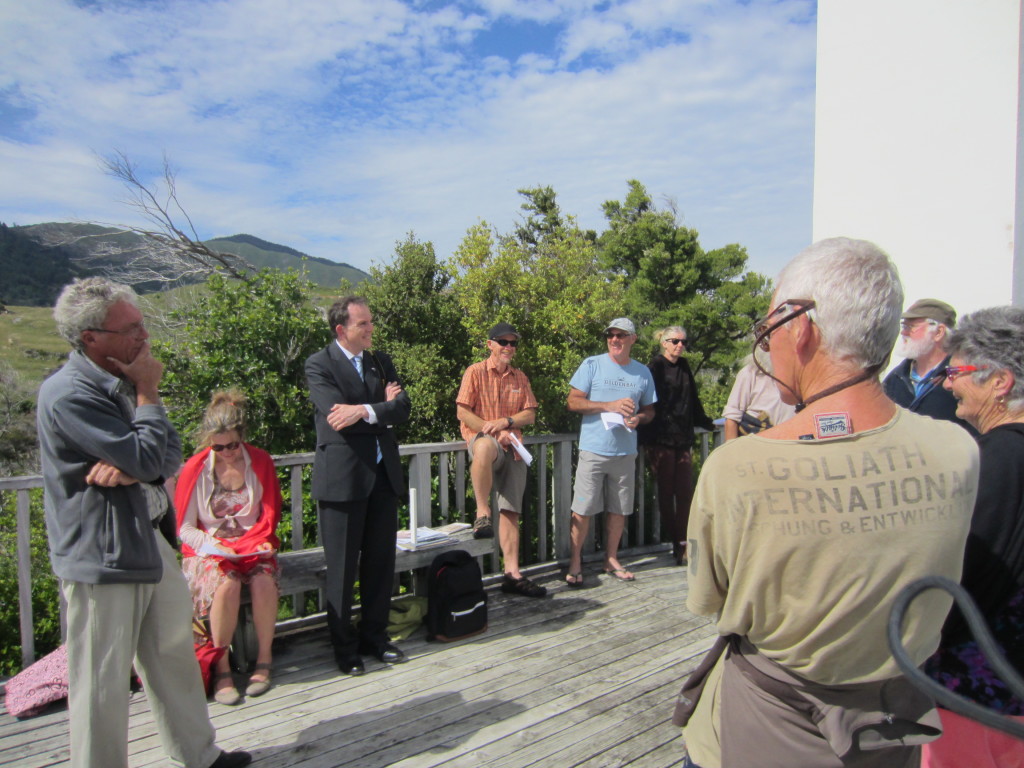 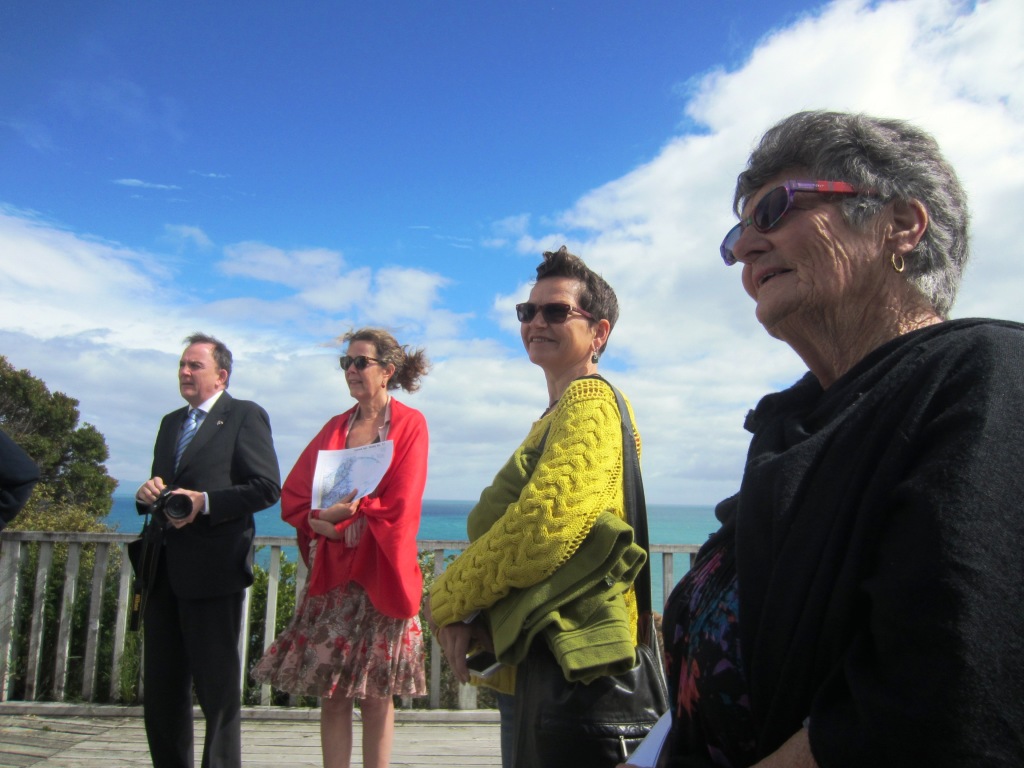 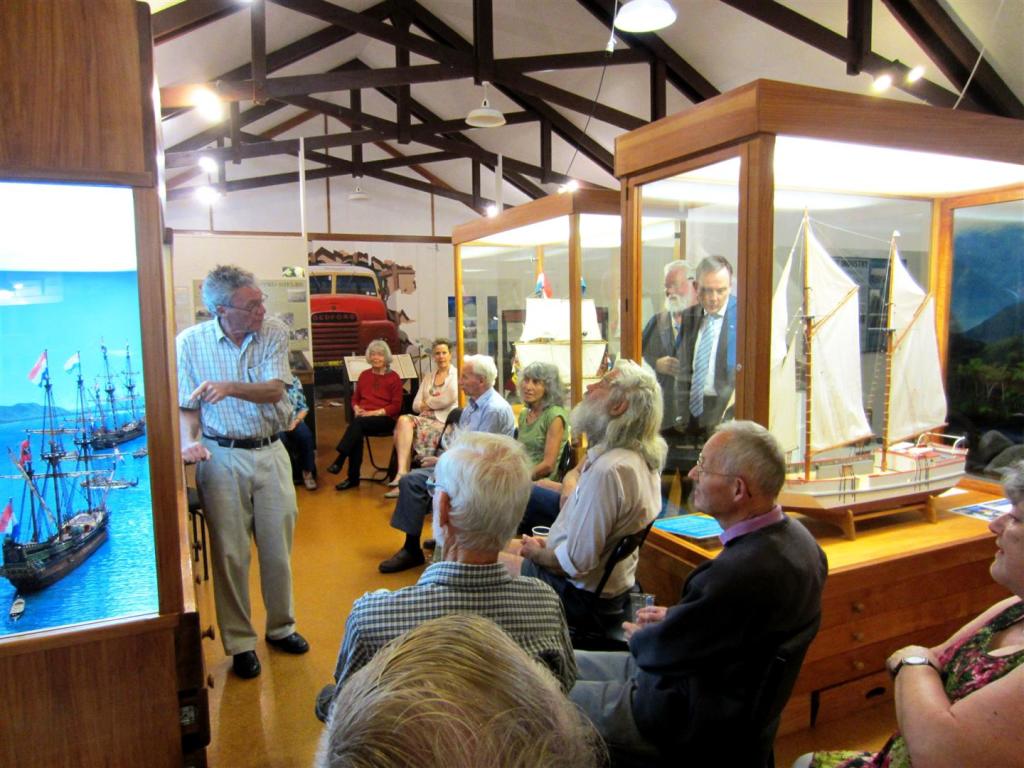 Floor talks at Golden Bay Museum, Sunday 18 December:  The ambassador spoke about the importance of continuing to build on the relationship between two peoples, and Dave Horry put the details of the confrontation into the context of communication, protocols and expectations, which were so different for the Dutch sailors and tangata whenua

Honoured by Ambassador’s visit for First Meeting Day (AT374) events

Golden Bay/Mohua welcomes ambassador Rob Zaagman and Monique Zaagman to this year’s commemoration of First Meeting Day (or Abel Tasman 374). This may be the first time since 1942 that an official representative of the Netherlands has been here on the actual date of when Tasman’s ships sailed in the Bay, on 18 December 1642.

Our activities this year have been affected by the tides, so there won’t be a walk to Taupo Point this year. It’s been very popular in the past, so we hope it will be right for the 375th anniversary next year.

Residents of Tasman District–where the 1642  “First Meeting” took place in what is now Golden Bay/Mohua–are proud that their mayor Richard Kempthorne and his wife Jane were invited to be guests at the recent state dinner for the Dutch King and Queen in Wellington.

Not only did the honour reinforce the already strong link between Tasman District and the Grootegast municipality (close to Abel Tasman’s birthplace), but it also created a wider recognition of the significance of Tasman’s voyage in New Zealand’s documented heritage record. Here’s an account from a local newspaper: 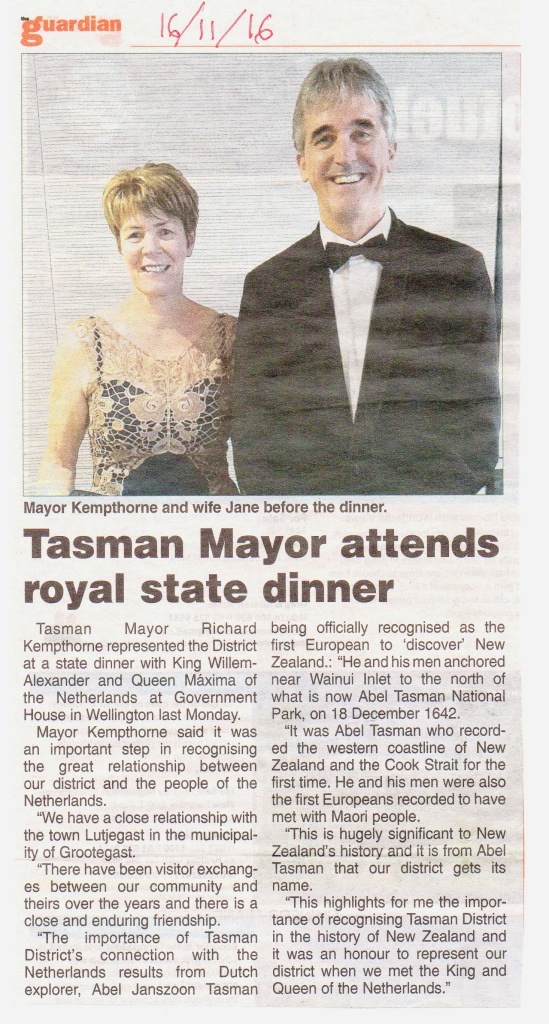