Who was the expedition’s primary draughtsman, and was there more than one? Some commentators have attributed ‘A View of Murderers’ Bay’ to Isaac Gilsemans.

On August 1st 1642 Gilsemans was described as having “fair knowledge of seafaring, and the drawing of lands”; however he may not have been the only senior officer with these abilities, and in my view was unlikely to be the man specifically appointed as draughtsman.

The instructions prepared by Schouten for Tasman and his councilors the day before the expedition set out from Batavia state that “a draughtsman has been provided for you”. Since Gilsemans, as Merchant, was already among the councillors being addressed, this probably refers to an additional and lower ranking specialist artist. According to Grahame Anderson’s The Merchant of The Zeehaen, a very similar statement appears in the instructions for Tasman’s 1644 expedition to northern Australia (p.130): “have proper drawings made of their appearance and shape, for which purpose we have procured an able draughtsman to join your expedition”.
Anderson doesn’t think the draughtsman procured for the 1644 expedition by the Council of The Indies in Batavia was Gilsemans, and speculates that: “it was not the experienced Gilsemans who carried out this task in 1644”. I question whether there is any real evidence that Gilsemans was the 1642/1643 expedition’s primary draughtsman either.
History abhors anonymity: we have no verifiable portraits of Tasman; accordingly some that are unverifiable, even highly unlikely to have been of him, have been pressed into service. There are no signatures on the State Archives Copy (SAC) or Blok Fragment (Blok) illustrations. The only experienced ‘drawer of lands’ we have a name for on the expedition is Gilsemans. This may be why its illustrations are so readily attributed to him. But can he have produced them all? some commentators think that differing styles are evident.

“Concerning the technique of the two draughtsmen, we may note the contrast between the confident and often light touch of the Blok artist, and the heavier handling of SAC; the absence of any visible pencil lines in Blok and the hints of pencil visible in SAC, which suggest a painstaking copy done first in pencil and then worked over in ink ….”

I have also observed a pencil guideline in SAC ink drawings of the Karamea Bight, so  think this too is most probably a copy rather than an original. However Patricia Wallace, in her 2006 paper Traditional Maori Dress: Recovery of a Seventeenth–Century Style? points out that one convincing detail, the maro waistband worn by Maori warriors, occurs in the SAC Murderers Bay illustration and not in Blok. She argues that we must assume the SAC Murderers Bay is either the original or, with the Blok, an ‘incomplete’ copy of other and now lost originals.

This idea of incomplete copies from lost originals seems sound: both  Blok and SAC copies of Farewell Spit and ‘Murderers Bay’ illustrations are likely to have been put together later using pre-existing drawings.  The Blok and SAC versions appear to have been drawn by different artists, and polished full-page illustrations such as that of Murderers Bay aren’t likely to have been created ‘on location’ in the vicinity of Golden Bay in 1642. It is of interest that while there are no visible pencil guidelines under the ink lines of the Blok, a pencil grid has been drawn over it, perhaps for copying purposes.

Viewing the Blok Murderers Bay illustration horizontally, in landscape view, its captions are written vertically, at right angles to the picture , whereas in the SAC version they are relocated and aligned with the picture. This better integrates the illustration as a whole, but with it came some alterations and omissions, such as the alteration of the Heemskerck to a stern view and the omission of the Maori hair feathers.

Until 2015 I saw both Blok illustrations as better drawn and thought them likely to be by the expedition’s specialist draughtsman, perhaps produced in Batavia in April or May of 1643 from drawings he did in New Zealand in the previous December. Before producing an illustration such as this for Tasman’s Journal its artist needed to know what illustrations were appropriate, and Tasman’s Journal, a tailored version of his log entries, can’t have been finished until after his return in 1643.

The Blok double sided leaf may be a surviving ‘fragment’ of either a complete journal or  a complete set of finished illustrations. I’ve now revised my view and think that Gilsemans could possibly have drawn both the Blok and SAC illustrations, though certainly he only wrote the captions for the SAC version.

Gilsemans may have overseen the preparation of the SAC Journal (or ‘day register’) in its entirety; the captions for all its illustrations seem to be by him, as are the marginal notations in the body of the text, though not the text itself. But is there evidence that Gilsemans also drew its illustrations?

The Huydercoper copy of the Journal contains views of the Tasmanian coast; these appear in Andrew Sharp’s ‘The Voyages of Abel Janszoon Tasman’ on p.115, and in ‘The Merchant of the Zeehaen’ on p.81. Anderson argues Gilsemans captioned and drew these, and certainly that does seem fairly probable. 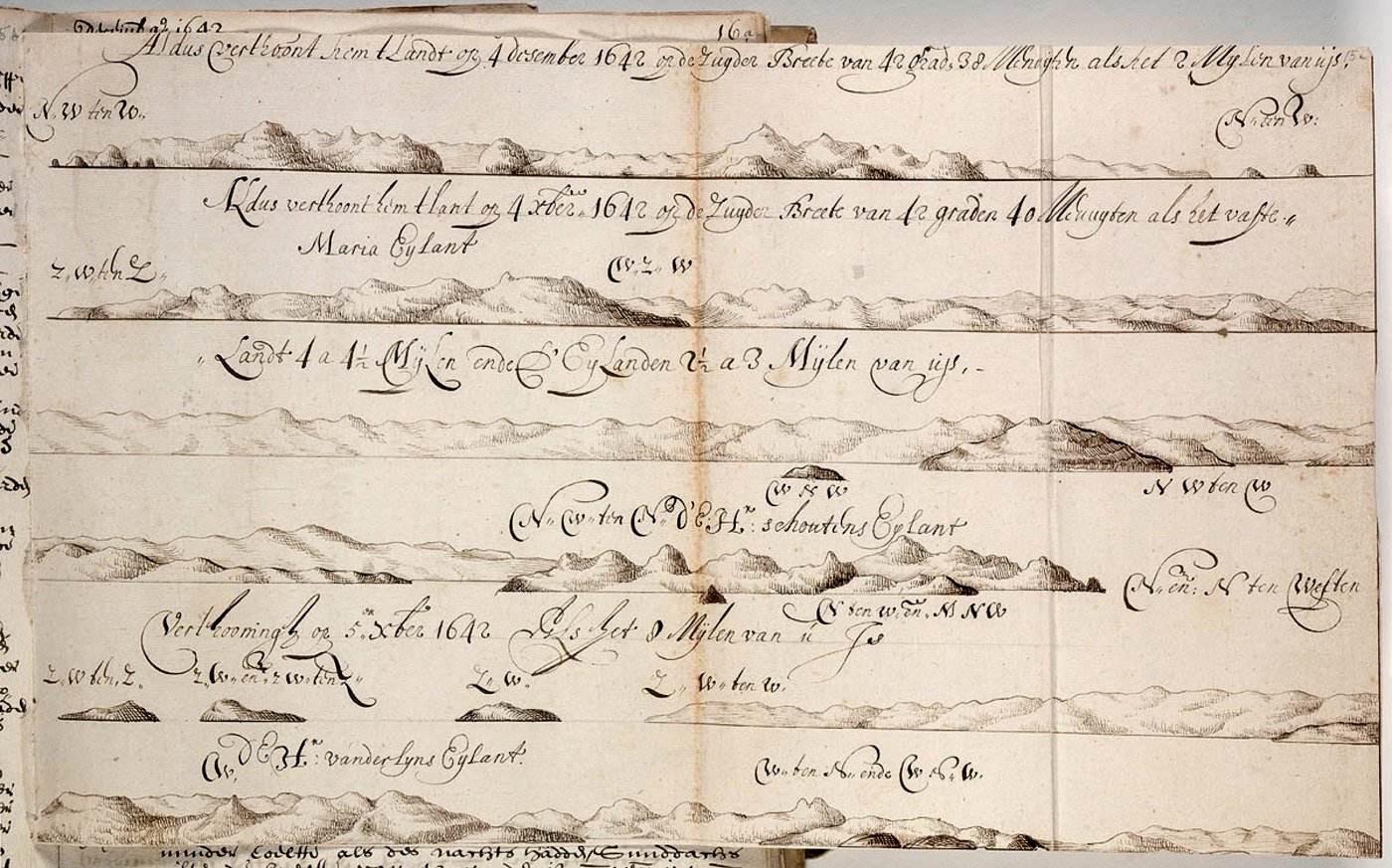 But was he also the artist who copied all the illustrations into the SAC? Here are some later coastal profiles from SAC. The calligraphy is certainly the same, but is the draughtsmanship?

Possibly so; possibly not. I don’t think there is any way that we can say with any certainty.

I juxtapose below two matching sections of a ‘Murderers Bay’ coastal view that appears top left in the Blok and SAC Farewell Spit illustrations. It now seems possible to me that Gilsemans drew both, but I assume that he was far too busy on the 18th and 19th leading the scouting party and making decisions in council to be doing the detailed coastal drawings, which I would think were done by the anonymous specialist draughtsman mentioned above.

Below both is a photograph taken from  the point at which Anderson and most other commentators believe the Dutch anchored on the 18th. I see a correlation with modern reality, and I see the Blok version (lower and yellower) as better matching the reality. Assuming Gilsemans drew both of these, we definitely see distortions creeping in. I can imagine that the specialist draughtsmans original sketch, which we no longer have, would have been even more faithful to the actual landscape. 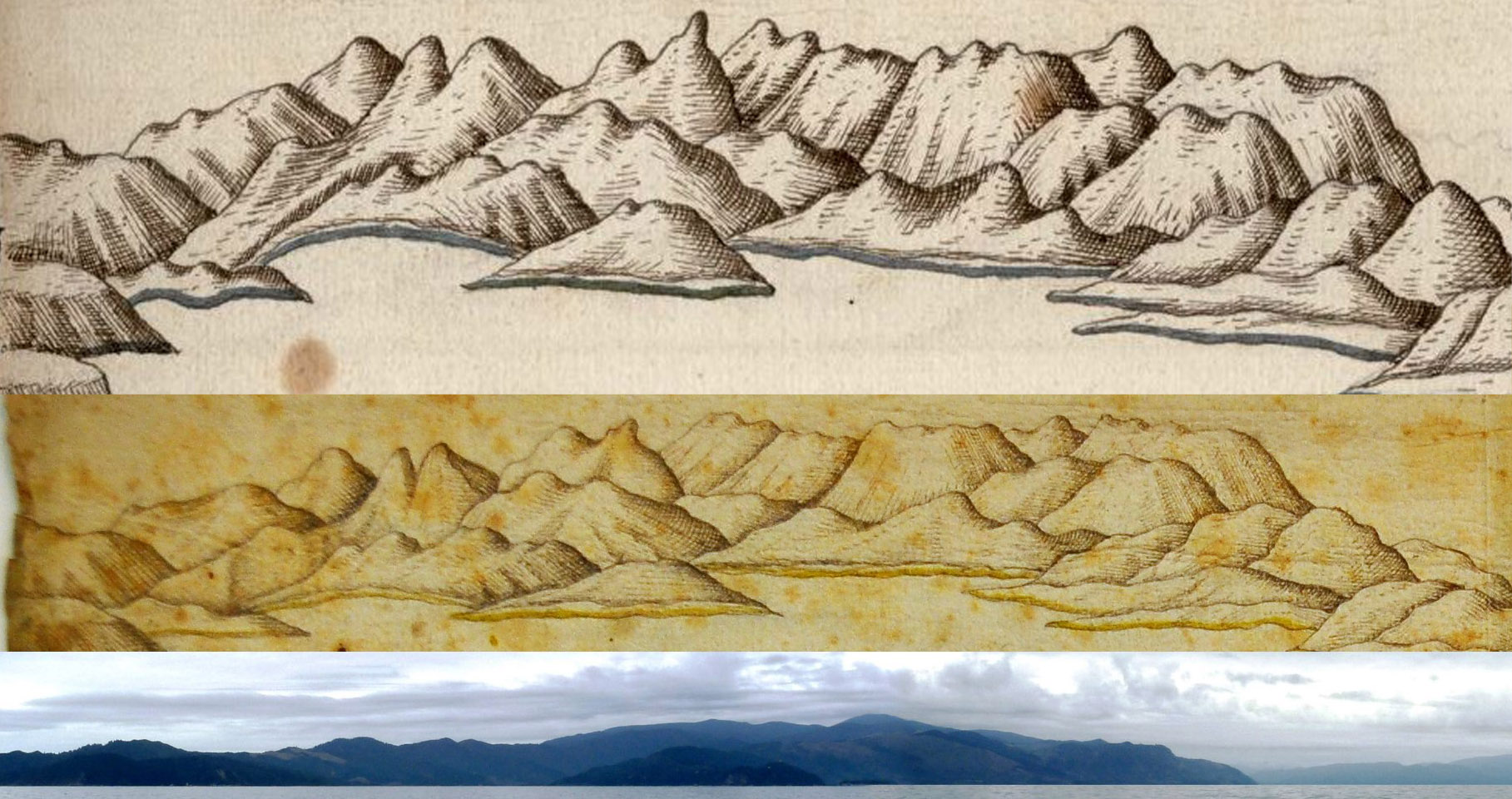 Anderson believes a view of Hietto which illustrates Arnout Gijsels’ 1635-36 voyage journal and is signed with the letters ‘I G’ to be entirely the work of Isaac Gilsemans: “finding his discreetly placed initials in the waves to the left of the scroll showed he claimed responsibility for the whole illustration and not just the lettering on it”. This illustration, once we have accepted that it is by Gilsemans’, gives quite a clear idea of what his drawing style was, for landscapes anyway, and it appears to me to match quite well the style of the Blok and all the illustrations in the SAC except perhaps some of the last, as shown above.

Part of page 144 of ‘The Merchant of the Zeehaen’

Two or more artists seem to have drawn and/or copied surviving illustrations of Tasman’s 1642-43 expedition. First Gilsemans, who evidently drew  the Tasmanian coastal views that now accompany the Huydercoper manuscript, along with its chart of southern Tasmania, and may have also drawn both sides of the Blok Fragment and most or all of the completed SAC illustrations

Next an anonymous specialist draughtsman appointed to the 1642-43 expedition who first sketched  the lands and peoples seen, as documentary art.

Lastly the illustrations in the SAC, including those of Murderers Bay and Farewell Spit, which were probably done in Batavia soon after the return of the expedition, could possibly include the work of other unknown copyists.

“In a report to the Netherlands authorities of the East India Company dated 22 December 1643 the Governor-General and Councillors at Batavia referred to ‘accompanying day registers of the aforesaid Tasman and pilot major Francois Jacobsen Visscher, in which the winds, courses, trends of lands, appearance of the peoples etc. pertinent is indicated, and are drawn’. The ‘day registers’ – journals with daily entries – so referred to were of Tasman’s voyage of 1642-3.”

I speculate that several copies of Tasman’s journal would have been produced for VOC’s directors in The  Netherlands, where there were six different chambers of the board in different provinces; a fully illustrated copy would have been a tangible return on their investment in such exploration. In any case, we know from the above that more than one copy was sent back at the end of 1643, as ‘day-registers’ (plural) are mentioned above. But SAC and Huydercoper copies seem to be the only 17th century copies that are still extant, and the only Huydercoper  illustration is the one shown above, presumably by Gilsemans and evidently pasted into what at first was an un-illustrated text.

The captions written on the illustrations in The State Archives Copy of Tasman’s Journal are probably the work of  Gilsemans as Anderson has shown; those on the  matching Blok illustrations are not. So draughtsman and caption scribe were not neccesarily the same person. Supposing Gilsemans did do the drawings and captions for the SAC Murderers Bay illustration, we still cannot confidently attribute to Gilsemans all its original component parts; e.g. the waka and crew reinterpreted by Witsen’s engraver in 1705.

Faced with the problem of provenance/attribution for Witsen’s ‘Vaertuig en Gedaente der inwoonders van Selandia Nova (Vessel and appearance of the inhabitants of New Zealand)’ I could suggest the following: ” ‘Vaertuig en Gedaente der inwoonders van Selandia Nova: after ‘Thus appears the Murderers Bay when you lie anchored in 15 fathoms in it’, circa 1643, attributed to Isaac Gilsemans and likely to be based in this particular on one or more specific documentary drawings of waka and kaihoe toa made in Golden Bay New Zealand by an anonymous specialist draughtsman mentioned only in Schouten’s 1642 final instructions’s to Tasman and his councilors.”

But thats a bit of a mouthful,  so it may be best to stick with: “after ‘Thus appears the Murderers Bay when you lie anchored in 15 fathoms in it’, circa 1643, attributed to Isaac Gilsemans”.

Robert Jenkin
This entry was posted in Uncategorized. Bookmark the permalink.