When Dutch explorer Abel Tasman sailed into New Zealand waters and came upon this ”large and highly elevated land”, he was looking for a great southern continent. For centuries many had imagined such a land mass in the southern ocean between Australia and South America. The voyage was organised by the Dutch East India Company, looking for opportunities to expand its wealth. 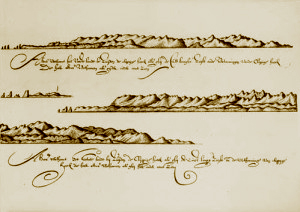 On 13 December 1642, Tasman and his crew on the Heemskerck and Zeehaen made the first recorded sighting of New Zealand as they sailed towards the West Coast of the South Island. Putting New Zealand on the world map had begun!

A few days later they rounded Farewell Spit and anchored on 18 December in what is now Golden Bay, making the first known contact with Maori. Confusion and misunderstanding led to confrontation, and there was loss of life on both sides.

So Tasman quickly sailed away, then sat out a storm in the lee of Rangitoto/D’Urville island, before sailing up the west coast of the North Island. After another sighting of Maori, on the Three Kings Islands, they left New Zealand waters on 6 January 1643.

It had been a remarkable three weeks, producing surprisingly accurate coastal information, and descriptions of a land and people previously unknown to the wider world. Excellent seamanship meant they also returned safely to tell the tale.

Tasman’s voyage is a landmark milestone in New Zealand history. There is no earlier written record; no earlier known meeting. Words and images capture the two worlds at a moment in time, marking the start of New Zealand’s shared history. 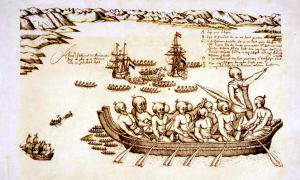 New lines were drawn on the sea charts, meaning others knew of the land. After about 400 years of undisturbed occupation, life for Maori would never be the same.

It was an important turning point. A sort of birthday.