Which waka was the subject of the sketch for ‘Murderers Bay’?

In Traditional Maori Dress: Recovery of a Seventeenth–Century Style? Wallace has shown convincingly the documentary value of the close-up waka and its Maori  crew, as seen below in SAC and Blok alternatives. 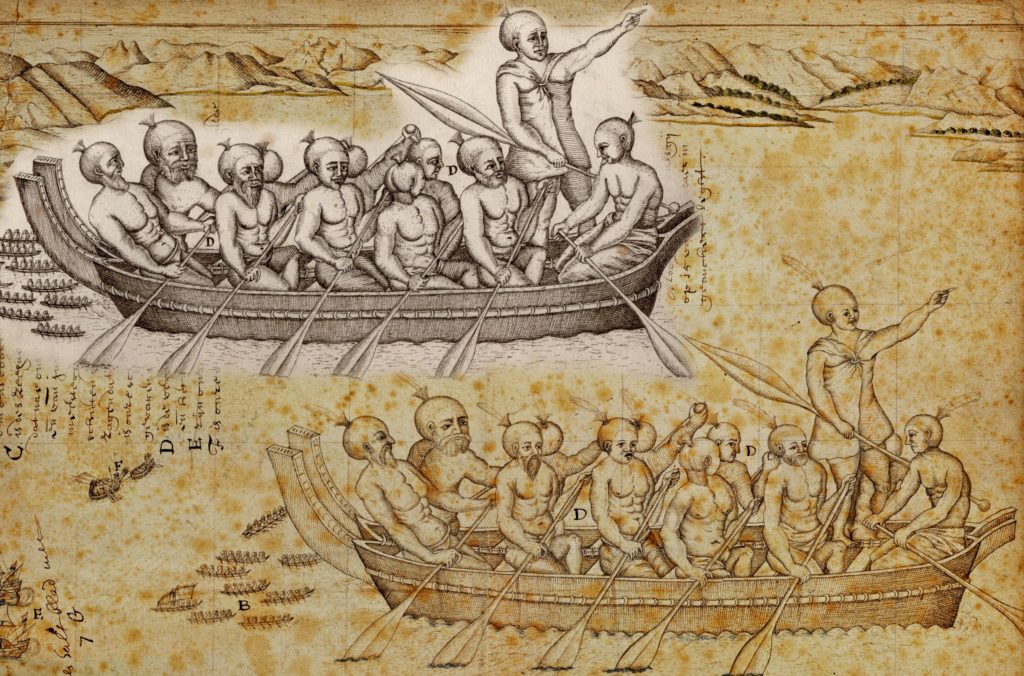 From where and at what time was this large double waka sketched in such detail? Which of the waka mentioned in the text might it have been?

It was too dark for drawing when the several waka came around the ships at dusk on the 18th. Lights weren’t seen on land until an hour after sunset(fires presumably) and only then were waka also seen, close in to  land. As two of these set out towards the ships in growing darkness the two open boats returned – lucky for them, considering what would befall the lighter of them the next day. None of our sources tells us they saw any native craft which may not be surprising as we are told that they only got as close to land as 3.5 kilometres.

While Mack and Hawarden think otherwise (A possible pre-Tasman canoe landing site …, 2015) there is no evidence of any waka being sketched on the 18th whether from land or sea. To speculate that Gilsemans, Visscher and Holman would allow one or more waka full of Maori warriors to get that close to them and having let it do so would sit calmly sketching it is seriously to underestimate both their obedience to standing orders and their shared experience. The orders were: “use great care at all places in landing with small craft, because it is apparent, the Southlands are peopled with very rough wild people … in all parts of the world, it has been found by experience, no barbarous people are to be trusted”. Also, these men were from a war zone – the East Indies under VOC’s ruthlessly enforced system of trade monopoly – where any small boats were in constant peril out of range of VOC’s protecting warships’ heavy guns.

So it is highly probable waka were only sketched between first light and noon on the 19th. Early that morning a waka with a crew of thirteen men (the Blok has twelve) came to within what the Heeres translation of the Tasman Journal calls “a stone’s cast from our ships”. Heemskerck and Zeehaen in deep water 7km from shore aren’t likely to have anchored less than three or four stone’s throws apart; at least 200 metres is the estimate of Dutch expert Albert Hoving. From Tasman’s journal it appears he and his men beckoned and offered trading goods but failed to persuade that waka to come closer and it ultimately headed back to land: “we waved to them many times that they should come to the ships, showed white cloth and some knives, from what were given to us as cargo, but however they did not come nearer but paddled finally back again: meanwhile the officers of the Zeehaen (at the summons of the previous evening) appeared on our ship, when we summoned the council …”.   If Gilsemans on Zeehaen also had some close up dealings with that early morning waka before breakfast then his role as a Senior Merchant it was more his task to tempt it with trade goods than to sit sketching it: “by shows of kindness gain them over to us, that you may the more readily from them obtain information touching themselves, their country, and their circumstances“.

After their breakfast, usually served at 8am, the Zeehaen’s three Ships’ Councillors went in their Indonesian style little boat, or ‘praeutien’, to Heemskerck where the journal text suggests the Ships’ Council  convened at once. During that  meeting documentary sketches couldn’t have been made by any of the officers. Council resolved to sail closer to the shore, mistakenly supposing Maori wanted to be friends. As they decided this a fleet of at least seven double waka (nine as the ‘sailor’s journal’ counted them)  came from land. One of these too held thirteen men (was it the same?) and came within a half  stone’s throw of  Heemskerck (25 metres perhaps?) while the Ships’ Councillors from Zeehaen were all still on board. Trade goods were shown again in ‘shows of kindness’, with the Upper Merchant still presumably involved. Meanwhile the praeutien returned to Zeehaen to convey her captain’s warning not to let too many Maori board , if they should try to, and to be well prepared for an attack. Zeehaen was lightly manned just then, missing her three top officers and seven other crew members, and as a cargo ship was always lightly armed. On its way back  to Heemskerck the unlucky  praeutien crew were surrounded and overcome:  ‘Half-way between the two ships the boat was attacked from all sides by the Southlanders’ (Haelbos). Nine thirty seems a likely time for this attack. Had it been later  there would barely have been time for the two ships to weigh their anchors, set their sails, and reach by noon a point due south of where they’d been the previous noon. We can imagine with what feverish haste the damaged praeutien and its surviving crew were rescued by Heemskerck’s small boat (the praeutien was never used again), then Zeehaen’s officers returned to their own ship to get it underway.

Eleven waka ‘swarming with people’ as Tasman’s Journal puts it, pursued the Dutch. Though Heemskerck had most guns, it was the Zeehaen, perhaps following behind, whose  gunnery apparently discouraged that pursuing fleet. Someone did draw a fleet of nine as if pursuing the departing ships. Te caption for those and the larger waka reads: “D.
Is the View Of their canoes and the appearance Of the People.”; The ‘tingang sail’ on the leading waka could suggest that such a sail was known and used by Maori at that time.

By noon the Zeehaen’s top men were again on Heemskerck for another Council Meeting . Zeehaen had lost four men, Maori were clearly hostile, the wind was rising and in twelve more hours the ships would almost hit the Manawatu coast, having averaged something like ten knots during the afternoon.

From which ship and at what time were the waka and their toa (Maori fighters) sketched in such detail? From Heemskerck probably, perhaps at first before the morning Council had convened, then almost certainly when it concluded and a waka hunua with thirteen men came to within a half  stone’s throw of her.  That waka was most likely to have been the subject for the close up sketch and it went on to actually ram the praeutien and overcome her crew. 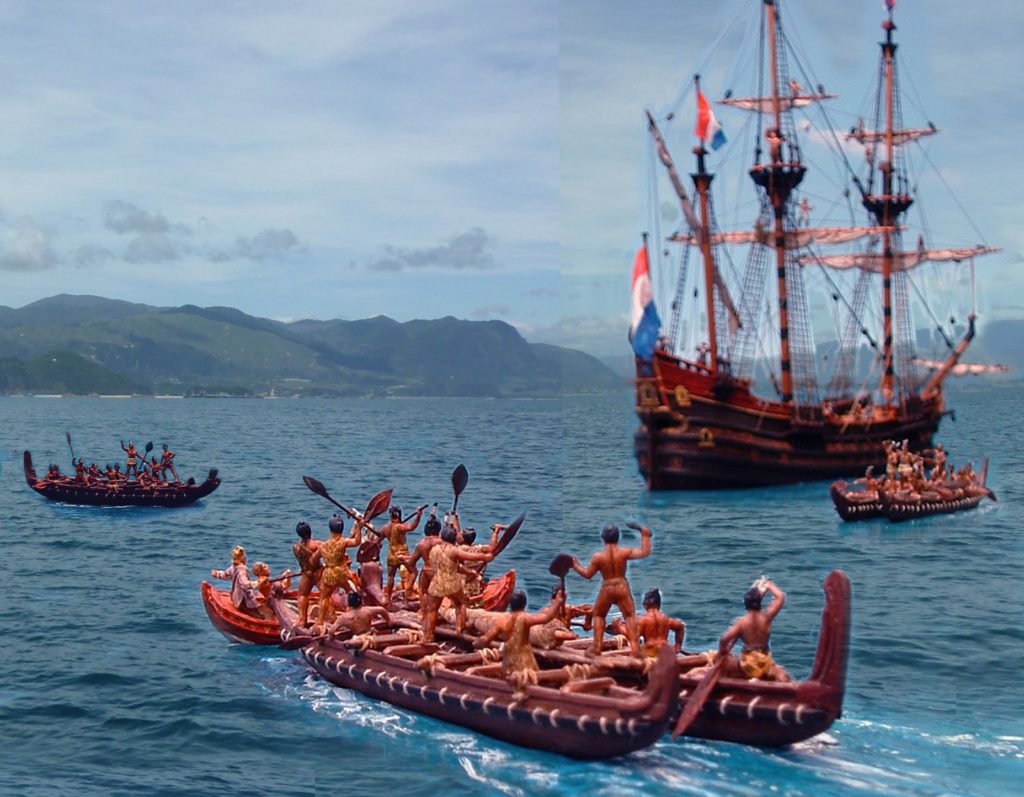 Who made such sketches? An un-named petty officer, the Heemskerck’s ‘tekenaar’, presumably as ordered by his officers. Such sketches and the illustrations based on them were evidently his and only his main job.